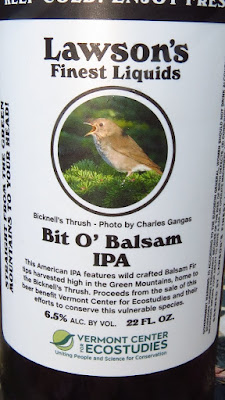 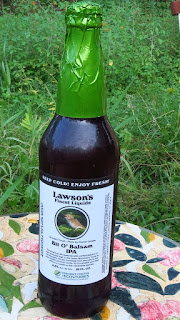 by Bernie:  I am pleased to report that I was the winner (citizen science survey prize) of three 22 oz. bottles of Lawson's Finest Liquids Bit O' Balsam IPA brewed in honor and support of VCE's Bicknell's Thrush Conservation work.

How cool is that? I won a locally brewed, very special limited-edition / quantity beer, and even met the man (Mike Sargent) who collected some of the ingredients - balsam tips from high up the Green Mountains. 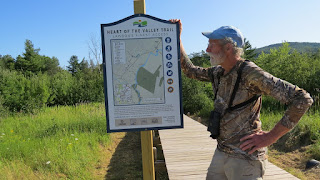 And there is more. I received the prize beer at The Taproom in Waitsfield (an incredible site both inside and out, and the surrounding boardwalk as well) and met several of the VCE staff. It was an honor to meet these dedicated and talented folks including, Susan Hindinger, Karen Bourque, Sarah Carline, Nathaniel Sharp, Mike Sargent, and Chris Rimmer (second from left on second photo). 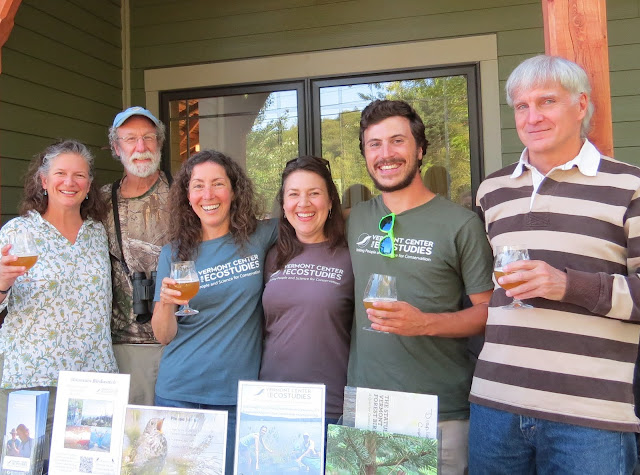 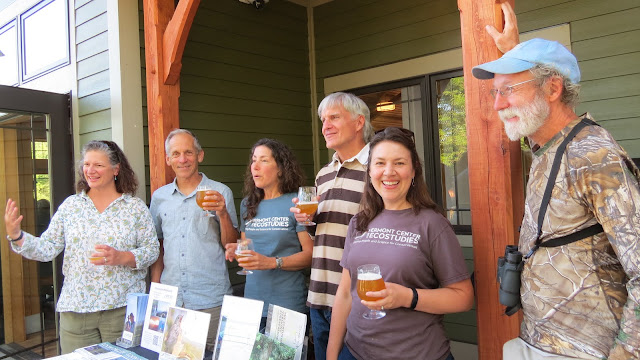 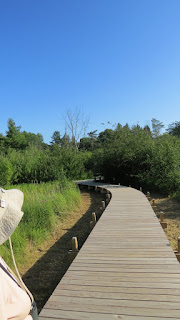 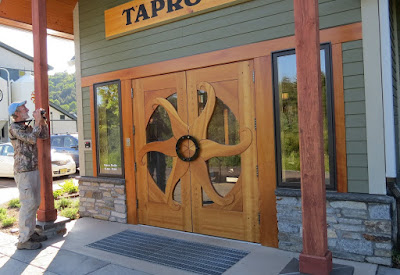 All this while listening to Chad Hollister strum guitar and sing to the large audience both outdoors and inside. 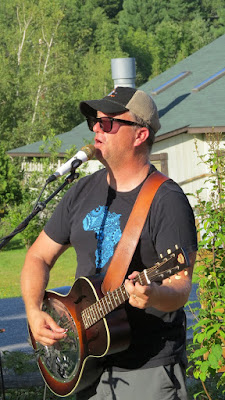 Now it is time to savor the taste of the Green Mountains, relish the Bit O' Balsam IPA and the work the VCE staff and volunteer Citizen Scientists do throughout the year. Then get back to observing nature! 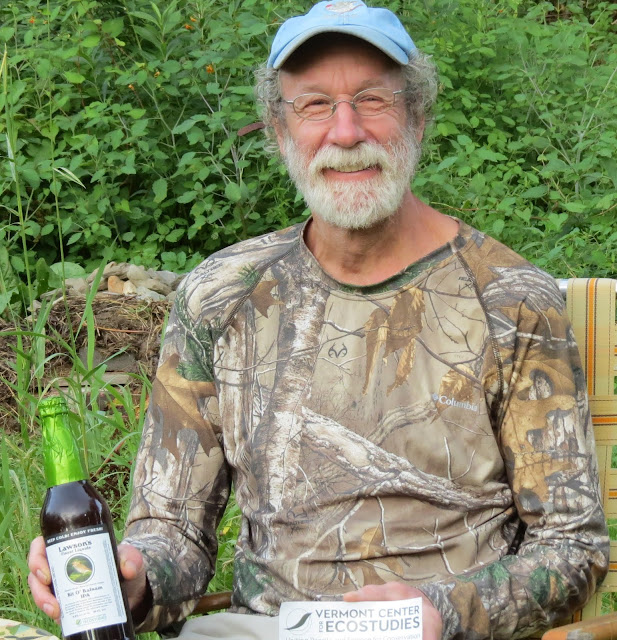 View my recent citizen science posting @ School is out, Science is IN! Jericho Citizen Science.

Seeking to live a life of greater simplicity closer to nature.
Bernie Paquette 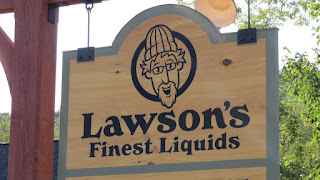 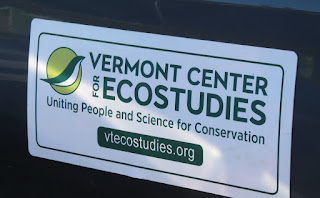 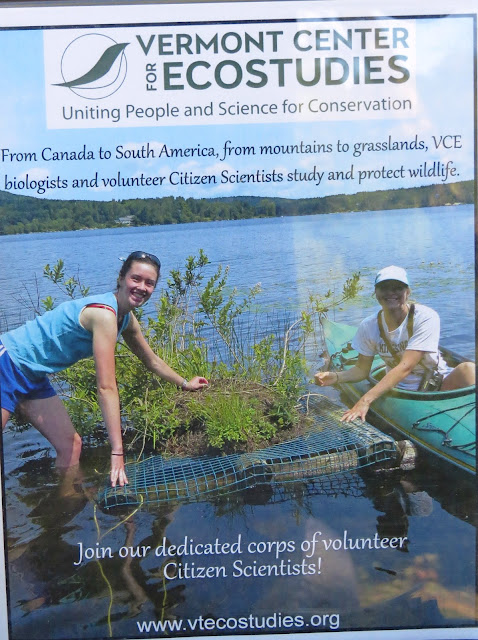 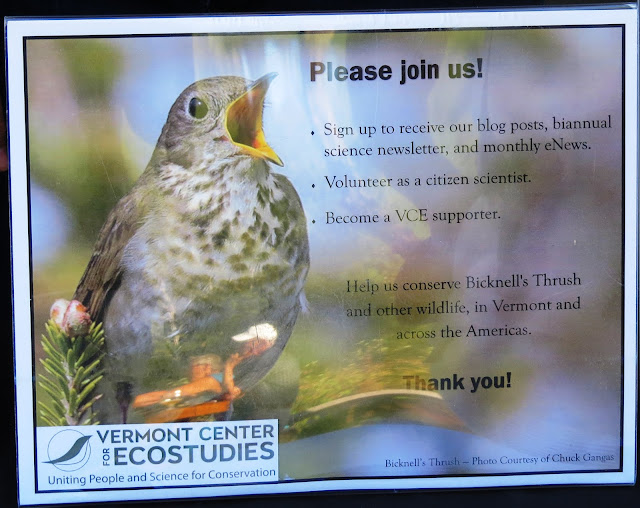 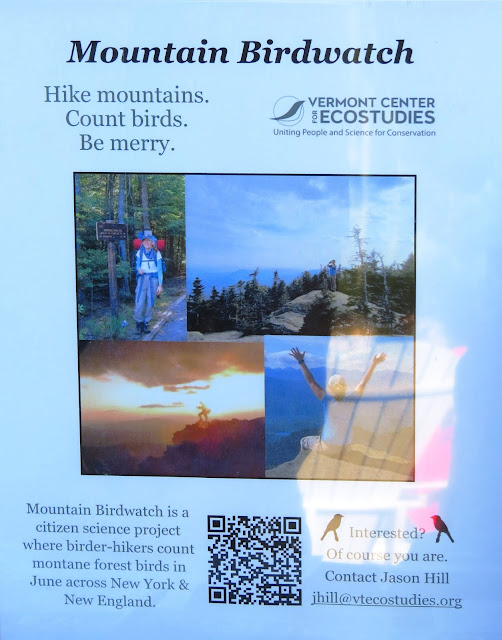 This site is written by Maeve Kim & Bernie Paquette.

In order to see birds it is necessary to become part of the silence. ~Robert Lynd

COMING SOON to a backyard near you - Birds, Songbirds, Corvidae, Strigidae (owls), Raptors, and more. Birds of all colors, sizes, silhouet... 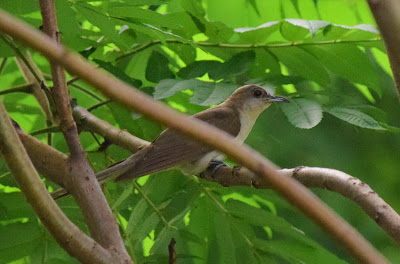 I can fly all day without leaving our kitchen window thanks to visiting birds! ~Bernie

Is your backyard Native?

Love birds? Cut down invasive honeysuckle. Read why at

What does it take to be a good birder?

I got interested in birding in 1978 when I learned they settled disputes by singing. ~Bob Weber, Jericho, VT.

The Oriole and the Ovenbird

How to make these next few weeks a little easier,

What we are reading

Will U Help Native Pollinators?

"Of all the paths you take in life, make sure a few of them are dirt." ~John Muir
"Know birds, know life; No birds, no life". ~unknown